Most new beehives are started by ordering a  package of  live bees, usually in the three pound size. Here in the eastern and central part of the U.S.,  we get our packages of  bees from bee breeders in the state of Georgia.

Packages are typically screen and wood boxes containing  2- or 3-lbs of honeybees. With approximately 5700 bees per pound, a 3-pounder would “bee” about 17000 girls.

Inside these packages of bees is a can of syrup for the bees to feed on during their trip and until they are installed in their new hive. The can of syrup and the Queen Cage are suspended from the inside of the top of the wooden box ( the box has screening on the front and rear sides for ventilation). The Queen and the bees inside the box are originally from separate hives  and must be kept apart until their respective odors mix and become one. If this is not done then the bees would kill the queen as she is not one of them. 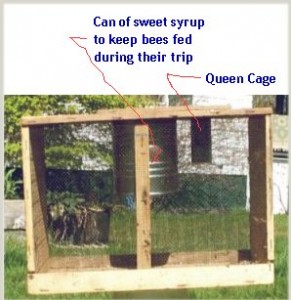 An empty package that held three pounds of bees shows  you the placement of the syrup and the Queen Cage.