Well, after one of the coolest and rainiest springs (5.28 inches of rain during June…1.36 inches above average) in recent memory, we’ve finally gotten into what promises to be a stretch of weather that we should have been having throughout all of June! (BTW, Click on the pictures for much larger versions)

I haven’t visited the bees much during the last few weeks, (but last week I did place the second deep box on the East Hive) since I’ve heard that they get cranky when they can’t be flying. But after a nice Saturday, and an exceptional Sunday this week, Cindy brought a camera and we dropped in on the hives to see how things were going. 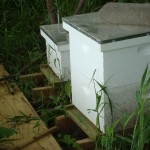 West on the left.

To give you an idea of the activity, I’ve been counting flights arriving and departing in a minute. Last three visits, the count on each colony has been between 30 and 50 (combined flights)…this Sunday, the flights were almost too numerous to keep up with, but I lost count at 90, even before my timer beeped at one minute. This tells me that the colonies are strong, and the girls are loving this warm, sunny weather. 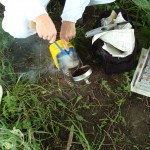 When I looked inside the hives, I expected to see a lot of activity, but I was really amazed at how much was going on!

West Hive has been the weaker of the two, but this visit proved that it’s pretty much caught up with East. Out of ten frames, there were bees working on seven…which means it’s ready for its second-story (deep box for queen laying, brood and honey for the bees). They are looking really good. Remember, “brood” consists of open cells with eggs and larvae, as well as capped cells with the pupa inside (think ‘cocoon’ here)… 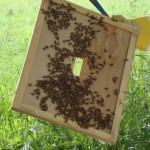 Under the inner cover of East

East Hive, which has had the second deep on for a week, I wasn’t so surprised to see good brood production, in fact I had brought some “supers” along, thinking we’d be ready to take East Hive up to the third and possibly fourth stories. The second deep needs to be 70% involved, seven out of ten frames with bees/brood/honey…but East won’t be ready for the third/fourth level for another week, maybe less. 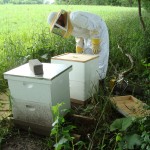 The flowers that we’re getting look like mostly clover, with lots of wildflowers starting to bloom out there in the ditches and along the edge of the pastures. But remember that bees will fly out to a radius of about two miles from the hives, so they could theoretically be covering 8000 acres on their foraging flights.

Really looking forward to my next visit, when I’m planning to go up another story or two (upper story boxes aren’t as deep, they’re called “supers”, and they’re for beekeeper honey when production goes into high gear).
And (!) congratulations to Tim and  Emily Zweber and a new addition to her family, Hannah Marie born Monday 27-June 8AM. 7lb, 10oz, 20 inches long…they’re all doing fine) 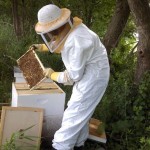 Examining a frame full of bees inside East