Well, it’s been a few weeks since I posted anything…Not that nothing’s been happening!

After the merge (13-July), we had a single hive, with five boxes. Two deep, a shallow, another deep, and a shallow on top. I gave the girls a little time to themselves to get themselves re-organized, and I thought everything was fine. But last week (15-Aug), when I inspected…starting at the bottom, I found no brood in the bottom two deeps. This concerned me a little. As I worked my way up, I did find that the bees had been packing honey in the second deep, and some in the first deep…but none in that middle shallow box.

By the time I got to the upper deep (fourth floor) that day, the girls were NOT happy that I was bee-boppin’ around in there and so, before I had a chance to really go through that 4th floor box, they had made it clear that I was not welcome on that day. So I closed everything up and dejectedly headed across the field for the car (yes I had my keys in the correct pockets this time).

So I left with the impression that we had gone queen-less again. The bees’ behavior gave me the definite feeling that they were cranky for being without a queen.

I gave them another week, and went in this Saturday (20-Aug) with Cindy and her camera. This time I started at the top and worked down. And what a surprise! We saw eggs and larvae in that top deep box, in a good pattern (all the eggs/larvae close together). By seeing the larva that this particular stage of development (little fat white grubs filling the bottom of the cells) and quite a few cells capped over…it told me that we had had a queen a’laying for at least 9 days on the frames that I was looking at.

Here’s a nice drawing of bee development – drone, worker, queen. Click that pic over on the right… 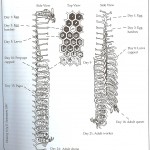 Here are Cindy’s pictures of the two kinds of frames. One is glistening with uncapped nectar (almost honey) and the other has the brood. In the brood picture, you can see the fat little bee larvae waiting to be capped over where they’ll grow as pupae for 10 days, before they emerge on or around the 21st day after being an egg.

“All right Mr DeMille, Ready for my closeup”…Cindy got some really good pics with the flash! She had her jacket and veil for protection, but this time she really came in over my shoulder to get some good pictures. This is the first time you’ve been able to see closeup what I see when I pick up the frames. 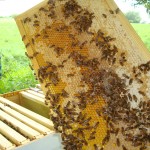 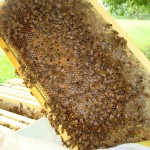 But this inspection on Saturday gave me a big relief, when I saw the eggs/larvae. It meant that the girls had a queen! Long Live the Queen!