I just  realized that I hadn’t posted since last fall, when we bundled up the surviving hive, topped up the feeder pail, wrapped the boxes with black tarpaper, and patted the box a couple of times, wishing the girls a safe winter.  With all the things that could go wrong over the winter (mice,starvation, chill, mites), we were really hoping that the colony would come out of their winter isolation in good shape and ready to rock this spring.

‘Twasn’t meant to be. When I opened up the top hive box on the 1st of march, the feeder pail was full, the honey stores inside the box still weighed about 80 lbs, and a very small cluster of dead bees greeted me.  Kind of sad. Not “loss of a pet” sad, but rather “that was a lot of work to have them all die” sad.

With a second set of experienced eyes (thanks to Mike Leary, from the St Croix Beekeepers) to look in on the evidence, our CSI team determined that the girls likely starved. Couldn’t get to the honey? Couldn’t get to the sugar syrup? Hard to say. But there was no evidence of fungus, or foulbrood…although they might have chilled out and died from cold. That’s the result of poor ventilation, and when condensation forms on the inside of the box…the moisture drips onto the bees, and they can’t keep themselves warm.

But I had already planned on taking our hives from two in 2011 up to eight this year, and everything was “on order”! New woodenware, frames, etc, along with eight packages of bees scheduled to arrive March 31. I ordered build-your-own hive boxes this year…

So we “droned up” (remember, drones are the male honeybees), and brushed out the little bee corpses, and started planning 2012!

We’ve got 5 hives set up out the pasture at ZweberFarm, and 3 hives will be going into a field where Peter’s Pumpkins in Shakopee, MN will be growing some vinecrops this year. Dale Wolf, of Wolf’s Honey Farm is heading down to Georgia to pick up 7 Million bees this week, and should be back in Baldwin with his buzzing load of workers sometime Saturday the 31st. More soon! 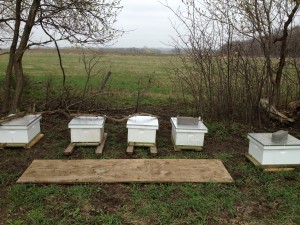