It’s been three weeks since the honeybees were moved in. They arrived on 10-May, and the queens came out of their cages sometime around the 13th. I stopped out to check on things on the 15th, and took out the empty queen cages, but didn’t spend any more time in the hive than to take those with me.

I’ve inspected a couple of times since the 15th, but I haven’t really seen the queens, I’ve only seen their handiwork.

On the 15th, I took out the queen cages, and observed that the workers had already started drawing out comb and filling some of the cells with nectar. That morning I didn’t notice any eggs, but I was a little nervous…so I got in and out pretty quickly. 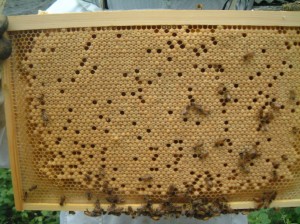 Then on the 26th, I stopped out to see them around 1030AM. The weather was perfect, sunny and warm. Dandelions were in full bloom out in the fields, so the girls were out foraging and bringing back plenty of nectar and pollen. Once inside the hive, I was more patient and took my time inspecting the frames. This time although we didn’t see the queen, I did see eggs (they are tiny little white specks in the bottom of the cells) and larvae (fat white worms curled up in the cells) as well as capped brood (pupae) cells. This was exciting! It meant that even though I hadn’t see the queen, she was busy laying eggs and the workers were taking care of the brood. 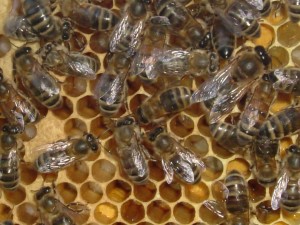 You see, honeybees go through complete metamorphosis. Like a butterfly, they go from egg to larva to pupa to adult. But unlike a butterfly’s caterpillar (pupa) stage…the honeybee spends the first three stages in their honeycomb cell. Only after they are done with the pupa stage, they come out of the cell. At that point, they are fully developed adults, ready to get to work.

From egg to emerging adult is usually a 21-day period — possibly a few more days, if the weather’s been cool. So I’m expecting the first emergence of new adults any day now. I’ll take another peek later this week after the 4th or 5th of June. Stay tuned…