West is The Weakest Link

Well, it’s Wednesday afternoon (July 13), and my Mentor Dan Klasen came out to my little beeyard in New Market MN to help me evaluate what’s going on. We looked in on the weak (West) hive, and the girls seemed “buzzier” than usual…they just sounded irritated. After spending a few minutes looking for the queen, we decided that the pattern of egg-laying looked crappy, and since we didn’t see the queen…we would inspect East. Those girls in West were cranky  BECAUSE they didn’t have a queen.

In the East hive, there were a couple of suspicious-looking peanut-shaped cells, which usually mean that the workers are building up “queen cells”…these even had  a nice little glob of Royal Jelly, but no queen larvae yet. So we collapsed these cells to keep them from becoming queens. (But in general, even though there were roughly twice the number of bees in East as there were in West…the girls in East were happy, calm and not nearly as loud and buzzy as the ones in West)

The rest of the inspection of “East” was good. Laying pattern is strong, lots of eggs, lots of larvae in open cells, and nicely capped brood (pupae/cocoons, remember?)…This side looks good! 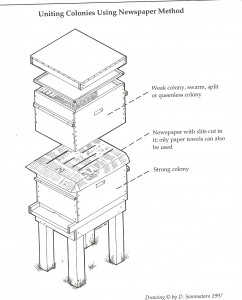 So we made the decision to merge, or unite the two colonies. To do this, Dan and I placed a sheet of newspaper above the third story, cut a few small slits in the paper…and placed the first story from “West” on top of the newspaper. The bees will start chewing through the newspaper, and by the time they get through it ,they’ll be accustomed to the queen pheromones of the strong colony below, and accept the fact that they’ve been assimilated. We hope! Here’s what that looks like.

This whole process took us about 35 minutes (Phew!). I’ll go back Friday afternoon, to make sure that the girls have gotten through the newspaper. If they haven’t chewed through, I’ll give them a hand by removing most of the paper. It’s going to be too hot over the next four days and they’ll need a way to get down and out of the hive. (I’m writing this on Thursday evening after attending the monthly beekeepers meeting in Baldwin, and talking to Dan…a day after the merge).

This is a common practice with weak hives, and it sort of bums me out that I came up with a “Weakest Link”…But(!) I’m glad that I started my first beekeeping year with two colonies. If I had started with one hive, and it was the weak one…I’d be done for the year.