Drones are often mistaken for the queen because the drone is bigger than the majority of bees in the hive (worker bees). The queen’s abdomen tapers to a point whereas the drone is blunt or rounded making him chunky! The drones occupy only about 15% of the colony. 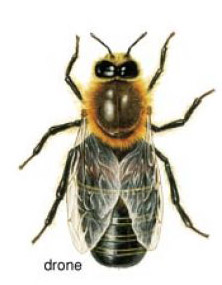 We once had a hive that was filled with drones. That was an indication the queen was not doing her job and had to be beheaded. Sorry queenie there was not going to be any honey in that man cave.

Drone larvae hatch from unfertilized eggs which are laid by a mated queen in hexagonal wax cells that are larger than worker cells. It takes 24 – 25 days for the new drone to emerge from the cell. The workers (female bees) feed the drone for two to three days and then they beg for food from the nurse bees which consists of pollen, honey and brood food. Drones never collect food, secrete wax or feed the young. Older drones take honey from the comb in the hive. Adult drones have no stinger and a short tongue so they can’t really gather nectar or say much. (JK about not saying much. Lol) About six days after they emerge from the cell they leave the hive on the first warm, windless sunny afternoon and hang out at drone congregating areas. When they detect the pheromone of a virgin or newly mated queen, they pursue her. If they mate with the queen they die soon afterwards. Don’t shoot the messenger here, I’m just telling it like it is. And if you don’t like that news, you likely won’t like this news either….. In the fall when the flowers stop blooming and there is no nectar to be found, the worker bees drag the drones out of their cells and drop them in the front of the hive! In preparation for winter all remaining drone brood and any adult drones in the hive are evicted. They usually die of starvation and exposure.